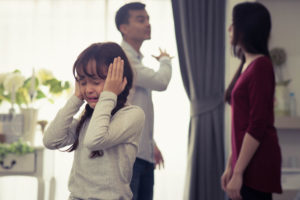 How can I tell if my child is depressed?

The symptoms of depression in children vary. It is often not diagnosed and treated because it is transmitted as normal emotional and psychological changes that occur during growth. Early medical studies focused on “masked” depression, where a child’s depressed mood was evidenced by acting or by angry behavior. While this happens, particularly in younger children, many children show sadness or low mood similar to adults who are depressed. The main symptoms of depression revolve around sadness, a feeling of hopelessness and changes in mood. However, children may also exhibit irritability when depressed which parents and teachers do not always recognize as possible depression.

Signs and symptoms of depression in children include:

Not all children have all these symptoms. In fact, most will show different symptoms at different times and in different environments. Although some children can still function reasonably well in structured environments, most children with significant depression will experience a noticeable change in social activities, loss of interest in school and poor academic performance, or a change in Aspect. Children can also start using drugs or alcohol, especially if they are over 12 years old.

Although they are relatively rare in young people under 12, young children try to commit suicide and can do so impulsively when they are upset or angry. Girls are more likely to attempt suicide, but boys are more likely to die when they make an attempt. Children with a family history of violence, alcohol abuse or physical or sexual abuse are at greater risk of suicide, as are those with depressive symptoms.

What children are depressed?

Up to 3% of children and 8% of adolescents in the United States suffer from depression. Depression is significantly more frequent in children under 10 years of age. But at age 16, girls have a higher incidence of depression and bipolar disorder than boys. It is more common in adolescents than in younger children. However, bipolar disorder in children can be more severe than in adolescents. It can also occur with, or be hidden by, attention deficit hyperactivity disorder (ADHD) or obsessive-compulsive disorder.

Can depression be prevented in children?

In the long term they have found that depression for the first time in children is occurring at younger ages than before. As in adults, depression can occur again later in life. Depression often occurs at the same time as other physical illnesses. And because studies have shown that depression can precede more serious mental illness later in life, diagnosis, early treatment, and close monitoring are crucial. As a parent, it is sometimes easier to deny that your child has depression. You can stop seeking help from a mental health professional because of the social stigmas associated with mental illness. It is very important for you-as a parent-to understand depression and realize the importance of treatment so that your child can continue to grow physically and emotionally in a healthy way. It is also important to seek education about the future effects that depression can have on your child during adolescence and adulthood.

Warning signs of suicidal behavior in children include:

Please take action on getting your child help and do not dismiss these warning signs.